A Squirrel on the Windowsill is Worth Two in the Tree? 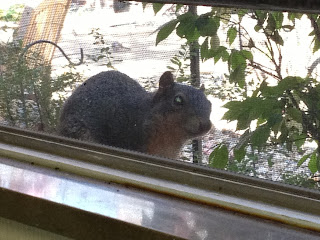 
One of the best things for me about moving into the Anna B. Millikin home in 2007, was that my office window looks out into the garden area. Over the past few years I've grown fonder of watching the birds flit around--something my mother has done for years.


One day in the summer of 2009, I was sitting at my desk working on data entry when I heard a tiny thud. I looked over to see that a squirrel had landed on my windowsill and was peeking in at me. He walked all along the sill, and then moved back to where he'd started, and peered in again.


This is probably where I should stop and tell you that I have an affinity for rodents of all kinds. I've had guinea pigs since 2004, and at one point, fostered a hamster for a client who was in shelter. I love them. They're fuzzy and cute and squirrels are no exception.


That day I went to Wal-Mart and bought a bag of mixed bird seed. The day after, I sprinkled the seed on my windowsill and in no time at all, my squirrel friend had returned, eagerly eating the sunflower seeds and corn I'd put out for him. I promptly named him Sammy.


The food drew other creatures, of course; a pair of cardinals, lots of sparrows, and some house finches. Well, then I had to go buy a post to put up in the garden to hang bird feeders on, so I could put out thistle feed in addition to sunflower seeds. Thistle is what finches tend to prefer, according to my parents, who've been feeding them for years.


I put out two feeders to begin with, one for thistle and one for sunflowers, and I continued pouring seeds onto my windowsill for Sammy. Within two days, he'd managed to destroy the feeder the sunflower seeds were in. But he was too cute to get mad at, so I shrugged and bought a sturdier, wooden feeder.


I put food out for him and the birds every day, and before long, I'd also acquired a rabbit that ate beneath the bird feeder several days each week, and started seeing a larger variety of birds: gold finches, nuthatches, and black-capped chickadees.


Sammy's still a regular fixture in the garden. I see him every day that I'm here, and have "introduced" him to other staff and clients.


One day that winter I was at home sick with the flu, and when I came back, I was privy to hearing an amusing story. Apparently when I hadn't gone out to put food out for him and the birds, and there was snow on the ground, Sammy made his way to the door of the lounge and was staring in at the ladies. One of them reported it to a former co-worker, who went out and fed him, and relayed the story to me.


I haven't gotten close enough to hand-feed Sammy yet, but he does let me get much closer to him than I can to the other squirrels who've shown up the last few years, and even if I have my window open (with the screen still between us, of course), he'll come and eat on the windowsill and isn't bothered when I talk to him or walk by.


When clients come to my office and he is there, I jokingly tell them he is my pet squirrel.
at November 30, 2012