Most of us were around in 1970. It’s normal to ask what were you doing on July 7, 1970. Avoiding an embarrassing answer for you, here’s what was happening. We remember we were in a very unpopular war. Protests sprung up everywhere. Young men left the US for Canada. The country was unsettled. The Aswan Dam in Egypt was being constructed. The USSR and France were conducting nuclear tests. Northern Ireland was in conflict. The US would soon launch Venera 7, for a 1st soft landing on Venus.

The treasurer’s report from November 1972 read balance $17.09. Pledges are needed. Were they wondering if it was worth the effort? Was it time to throw in the towel? No. The board had a two-hour meeting and came out with a decision to buy a house. A house on East Locust was purchased for a new headquarters. By 1973 the budget increased to $14,000 and they bought a typewriter. 1974 Nancy Jo Batman becomes secretary. A year-round system for collecting foodstuffs was initiated and DOVE becomes the sponsor of the VISTA program.

The DOVE house in redecorated for the ten-year anniversary in 1980. RSVP has grown to over 400 volunteers and the overall budget is $125,000.

In 1980 Fred Spannaus included in his annual report a synopsis of the first ten years. ”What I found is this: Ten years of steady, Consistent progress. No single year viewed in isolation, looked very spectacular. But … a pattern was there. Each year took our work of the previous year a step or two forward; each year provided one or two good ideas which bore fruit in the next. For as surely as we’ve enjoyed no exceptional year, we’ve suffered no bad year. It was impressive, this ten-year flight of steadily ascending stairs. The history of DOVE is consistent, dynamic and progressive. Far from being a problem, this is perhaps one of our ministry’s strongest assets. Our past demonstrates the long-term sense of commitment shared among the hundreds of folks who have been vital parts of DOVE.”

As we look back on DOVE’s past this remains the guiding focus of DOVE today. Consistent progress. 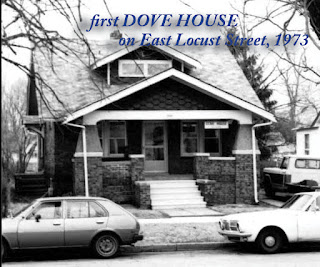