When people become involved in their communities they take ownership of the problems facing all residents.  Community engagement is about people working and learning together, gaining strength from each other and sharing visions and actions that lead to a common goal.  Volunteering is a great way to begin your community journey, but did you know there are already many dedicated volunteers serving in our community? There are opportunities for volunteers of all ages to get involved and make great things happen. We have national, state, and community-based organizations that help mobilize all of those cherished volunteers, but did you know the need for volunteers never decreases? There is always an opportunity to get involved with something you care deeply about. Do you want to help build homes, help keep our environment clean, teach someone to read, delivery a nutritious meal to a shut in, rock and read to babies, or respond when disaster strikes? All of these volunteer opportunities exist right here in our community and much more.


Our Retired and Senior Volunteer Program sponsored by Dove is just one avenue for those 55 and older to get involved in their community and share their talent and experience with members of the community who are in need of a little love, encouragement, and hope. Volunteers can get started by calling anyone of your local non-profits and asking how you can give hope to those they serve. There is a whole network of volunteer coordinators who strive to find volunteers of all ages the perfect place to offer hope and they would all love to hear from you.


National Volunteer Appreciation Week is April 23rd-29th and it is a great time to show volunteers in our community a little appreciation and anyone can do so by simply saying thank you to the volunteers you encounter daily at local hospitals, libraries, museums, food pantries, community events, and neighborhood programs. Or you can get started volunteering now and be the hope your community thanks.
Charlie Gillaspie
RSVP Program Director 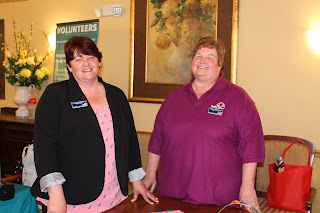 
The Dove Children’s Clothing Room is a place where families may select free, good quality clothing for infants and children. The Clothing Room is located at Prairie Avenue Christian Church, 2201 E. Prairie Avenue in Decatur. It is open Monday through Thursday 1:00 to 3:30 p.m.. Families can "shop" for their children once every 30 days and are allowed 3 outfits per child, as well as 2 new pairs of new underwear and socks if available.

The Clothing Room serves children and young adults from infants to age 18. We do not require referrals, but we do ask for each child’s age and gender for our records.

We count on the help from the community and always welcome donations of gently used items, including clothes for infants, school aged children, and teenagers, and baby items. We are always in need of new socks and underwear and will gladly accept monetary donations to purchase these items. There is a locked, blue drop box in the church parking lot where donations can be deposited.

The Dove Children’s Clothing Room is operated by volunteers who are members of the Retired and Senior Volunteer Program at Dove, Inc. The RSVP program is for people 55 and better who are looking for volunteer opportunities in the Decatur and Macon County area. Thanks to all who make this service to area families a reality!
at March 17, 2017 No comments:

After spending several months on the back half of 2016 talking about abusive behaviors, we decided to take a different spin going into 2017.  You see we spent a long time slowly working through and examining different forms and subtypes of abuse including the many forms of emotional abuse.  This gave a very realistic look at some of the more “incognito” forms of violence that abusers get away with such as blaming, confusing behavior, corruption, destructive criticism, intimidation, isolation, manipulation, and even obsessive behavior.  What we realized in closing out the year was that we had developed a very strong sense of what kind of traits and behaviors that we don’t want in our lives.  On the flip side, we hadn’t really answered the question of what we do want in our lives.


It was a striking realization that while some victims of abuse started with a very pleasant life full of positive relationships, others have not been so fortunate.  For those folks stuck in a life time of abusive relationships, or even for those stuck in a rut of bad relationship after bad relationship, it wasn’t enough just to recognize abuse.  Many of our folks were looking for the answer to “what should I be looking for?”  In fact, one client put it quite frankly by stating, “I already know what a bad guy looks like.  How do I know what a good guy looks like?”  And there was the big question.


It makes a lot of sense really.  I’ve used the example I once heard myself by talking about money.  How can you tell the difference between a real $100 bill and a fake one?  For that matter, how do you know whether a $100 bill and a monopoly $100 bill is legitimate currency?  The answer isn’t in being able to spot a fake.  If you know what a fake looks like, you can only spot a fake.  In the same way, knowing what abuse is only allows you to spot abuse.  The real solution is knowing what legitimate currency looks like.  If you know all the hidden traits, water marks, magnetic bars, etc. of a true $100 bill, then you are able to spot a true bill, AND you are able to avoid the counterfeits who lack those traits.  Likewise, being grounded and knowledgeable about positive character traits, values, and virtues in a good relationship can help you to spot positive people and avoid the manipulative counterfeits.


So began our journey into finding what I have chosen to call the “good mate.”  Our new effort at the beginning of this year would be for our clients to begin learning about positive habits and traits instead.  We wanted to keep it broad to fully recognize the breadth of abuse.  So instead of “good man” or “good date” which would focus too specifically on romantic endeavors, I chose to include all relationships.  Whether you are looking for a romantic relationship, a spouse, a friend, a roommate, or even trying to maintain healthy boundaries with family members; we want to make sure that those closest to us are good mates.


As a starting point, I have chosen to take two source materials I use as character building tools in my other role as men’s minister, and flip them on their heads as strong and positive character traits or virtues in all people.  Thus far we have tackled two of these traits.


First we have examined what it means to be a determined mate.  Recognizing right off the bat that determination can also be a very negative trait used by abusers, we were very specific in how we examined this trait.  We talked about determination being habit of refusing to quit until we accomplish our goals, with the biggest stipulation being that the goals themselves were positive and good for all involved.  Taking these good morals into consideration, the question became whether that person in your life is will to do what it takes to succeed, even when it requires personal sacrifice.


We discussed that many people, unfortunately men in particular, take their drive and energy and use it to take the easiest possible route instead of channeling it toward real success with their goals.  For abusers this tends to play out in forms of manipulation, control of others, and blame shifting.  Recognizing that the road to good goals is often marked with road blocks and obstacles, you can ask yourself, does my mate react positively or negative toward such trials.


Lastly we examined the fact that determined mates refuse the nostalgia of the past, such as getting stuck in the glory days of your youth or being stuck on the wrongs of your past, or the speculation of the future, such as always looking forward toward what may be and not being grounded in the present.  Neither of these habits provide any motivation or determination toward success in the here and now.  Instead determined mates are ready to embrace the present and pursue their goals.


The second trait we have examined is that of a coachable mate.  Coachable mates are defined as someone who is willing to take and respond rightly to critique.  This is a really important value in any mate in your life, and especially from a domestic violence perspective, as abusive personalities tend to be quite the opposite.


Unfortunately, in today’s world many folks, often times men, grow up without any real strong mentors, role models, or father figures.  For many this results in feelings of emptiness and insufficiency.  It is at this cross roads that people can choose to let their circumstances define who they are or motivate them to become something better.  Those that choose to be defined by their circumstances often don’t want others to see their inadequacies and attempt to bury the truth of their weaknesses.  They might replace the truth with masks of false conceitedness, defensiveness, apathy, or even outright abuse.  On the other hand, those that choose to be motivated by their circumstances can choose to be coachable and learn something along the way to better themselves or their situation.


Some other quotes we examined from Darrin Patrick were, “The [one] who refuses to grow in dying a slow death.  Learning is like oxygen in our lungs or cold water on a hot day.  It’s what we are made for.”  This stresses that there is an inherent wiring inside of us that thrives when we learn and expand our being.  Also, “the first step toward teach-ability is recognizing that we have everything to learn and we can learn parts of it from several people.”  Being coachable means recognizing that you don’t have all the answers and you can’t do everything, but there is a world of people out there who can fill in the gaps in your life, a diverse world of people who all have a part to play in making you an even greater person.


We are excited about finding out more and more on how to spot the good mates in our life, keep the bad mates at a distance (if in our lives at all), and thrive in all our relationships.  Maybe you can take part of this journey along with us.


*Source Material used includes The Dude's Guide to Manhood: Finding True Manliness in a World of Counterfeits by Darrin Patrick
at March 03, 2017 No comments: