I was a junior at Novato High School in Novato, California in 1999. I really have no idea what was planned for my day, but I do know whatever it was it did not happen. We were an hour behind Colorado timewise, and somewhere between 9 and 11 o’clock the school went into a weird, silent mode. 13 kids in Littleton, Colorado had been killed. Two armed teens stormed into their school, after their original plan of setting of bombs failed, and began killing their fellow students. We didn’t have phones. The only internet access was in the library. We got news from our teachers and eventually we all saw the news on various TV’s that had been wheeled into selected classrooms. What even was this? A school shooting? Who even does that?! We’re we safe? Is this going to happen here now too? There was no language to even describe what was going on. The word ‘Massacre’ got thrown around a little bit, but overall the weird, collective silence that was present at school was there because it was that simple; we didn’t have words for what had just happened. Teachers didn’t have words to describe what was happening. Various admin around the school could not find the right words. And without words or language, we could not process this tragedy. We just cried and stayed together. That morning we were all Columbine Students, crying over the loss of 13 fellow high school students.


The days and months following April 20 my high school and the community came together and honored and remembered Columbine. There was a school memorial service in the gym. We wore silver and blue clothing. We made silver and blue jewelry to wear. I even attended a church memorial service for the victims in town, and I know there were several more like it taking place. This was our tragedy, and we weren’t going to let it just get forgotten.


During this time there was a figure we looked to, whom became a familiar face that at times we even stated we needed to know what he was doing and if he was going to be on tv again soon to update us on what was going on. We needed to hear from him for simply nothing but support and reassurance. This man was Mr. De. For whatever reason, with all the news analysis going on, all the speculation going on as to why these kids decided to open fire on their school, all the parents of the lost kids speaking, the one person we NEEDED to hear from was Mr. De. He became our principal, the one we needed guidance and assurance from. And we all became his kids, because when he spoke, he was speaking to us. Not the media, not the other parents of the world, just us. I can’t really put into words why this connection to Mr. De mattered so much, and quite possibly maybe it’s because our principal was also called Mr. D, and no one could stand him, and he never did anything to help us, but here was the Mr. De that was the exact opposite of ours and to us, he was the good Mr. De. And we needed him. Over time we stopped seeing him on tv and life carried on as it does, but we never forgot about that day, and most of us never forgot Mr. De.


Columbine was my high school tragedy. And my peers around my age consider the same. Just yesterday I mentioned to a few friends I met Mr. De and the reaction from them all was the same ‘I remember that day like yesterday’. One even said simply “Damn. That’s heavy”. And that’s the best way to describe what we carry around, still being Columbine almost 20 years later. Heavy.


But I also gained something yesterday. Something that I didn’t know I needed. I received closure. And I received it from the one person I needed it from. When Mr. De started to speak, I went still. I couldn’t move. I started to shake. My heart began racing. For an hour and 20 minutes I didn’t see or hear anything but him and the words that were coming out of his mouth. I relived April 20, 1999. But I got the “then what” answered. I got the reassurance that he did do all that he could for all the surviving students. He was visiting those wounded in the hospital persistently and never gave up on them. He made sure that all those that were in school during this tragedy made it through their daily lives at school. He did what we all knew he would do. Because he is our Mr. De, and that’s how he rolls. And we are his kids.


After he spoke, and I got myself together while others were heading off to various other workshops taking place, I shouted “Hey, Mr. De” like I had done it a million times. And he reacted as if I had. We spoke, and I thanked him for closure and he made sure to tell me to call him when I am in Colorado to go to lunch and he would take me to the Memorial. Consider that done Mr. De.
Liz Mackey
Piatt County Domestic Violence Coordinator

(staff attended the Common Ground Conference, hosted by the Judicial District in Effingham in November 2018)
at November 30, 2018 No comments:

The Heritage and Holly Historical Home Tour has been a part of the Thanksgiving Weekend Tradition for many  years. Formerly a fundraiser for NWRAPS, it was given to Dove in 2017 because of our long association with neighborhood groups and because of the Anna B. Millikin Home, Shelter and  office space for Dove, right in the middle of the historic west end.

This fundraiser will support all the programs of Dove - what a fun way to support to do that and to enjoy this holiday tradition!

$18 Advance Tickets are available at the following locations through 1:00 p.m., November 21:


To link to the online site, visit doveinc.org.

Westminster Presbyterian Church, 1360 West Main, is the first stop of the tour. A $20 day-of-event ticket can be purchased there. The tour will feature seven stops, decorated for the Holiday Season in the Historic West End of Decatur. 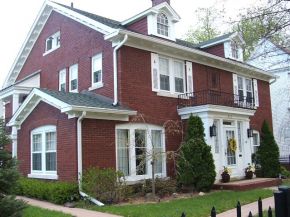 Jesus once said that it is more blessed to give than to receive, and in the years doing Christmas Baskets at Dove, Inc., I’ve found that to be true.


I look at my life, at my home, and I know that I’m more fortunate than a huge percentage of the world’s population. I have a loving family, a house to live in, heat in the winter, air conditioning in the summer, a job that I love, food on the table each day, a dependable car to get me where I need to go, and relatively good health. I am beyond grateful for all that I have.


I’m also grateful for the knowledge and awareness I have of those who aren’t as fortunate as I am, because it puts me in a better position of helping.


Did you know that the nationally, the average age of a homeless individual is 9 years old? According to feedingamerica.org, more than 40 million families in the United States struggle with food insecurity, never knowing if or when they’ll have their next meal, let alone receive a gift for Christmas. The numbers are certainly overwhelming to look at or contemplate. But we can’t let that overwhelming feeling render us helpless.


We may be unable to help every single person or every family in need, but that doesn’t mean we can’t help at all. There’s an old story about a boy who was tossing stranded starfish into the ocean when an older man came along and asked him what he was doing. He told him he was saving them by throwing them back into the water. The older man scoffed, saying he couldn’t possibly save all of them. The boy threw another starfish back into sea and replied, “Maybe not, but I just made a world of difference for that one.”


Are you able to assist one person or one family, in receiving a gift or food for Christmas? Can you donate a (new) children’s toy for our basket drive? A can or two of food for someone to eat or a new pair of gloves and a hat to help keep someone warm? There are so many ways you could make a world of difference for one person or family by donating or volunteering at our Baskets drive. Please consider joining us in assisting families in our community this year.
Angie Williams - Christmas Basket Coordinator
at November 02, 2018 No comments: